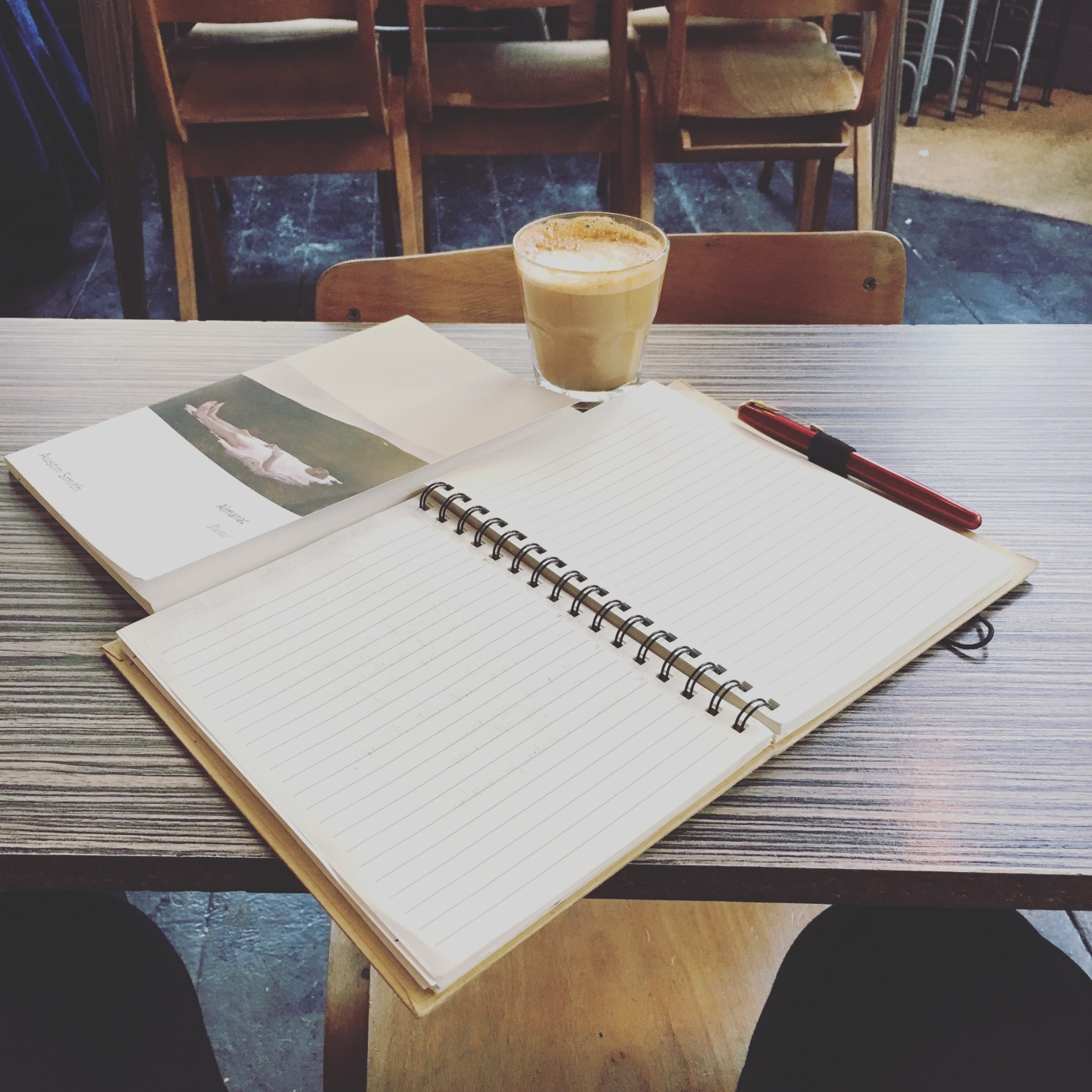 ‘It’s a numbers game’ is a phrase I seem to be using a lot recently.

My name is Joshua Judson. I am a poet, or at least I have been calling myself a poet for about two years now.

I wrote my first poem at the age of 16 in the library of my Sixth Form College, to try and impress a girl that I really fancied. I enjoyed it so I carried on. My focus until this point had been music, I was determined to be a musician – a great one if possible. But when my attention turned to writing, I found I was a much better writer than I ever was a musician. On joining the Mouthy Poets collective based at Nottingham Playhouse, I was part of a group of people who supported, informed and pushed me. I learned more about writing poetry in two years of being a part of Mouthy Poets than I have learned before or since. It became clear that I wanted to be, and in Descartes logic, therefore was, a Poet.

After leaving Sixth Form, I took a gap year, worked several jobs and travelled to America. I deliberately visited poetry-centric cities: Boston, New York, DC, Chicago, performing wherever I could. Trying to learn what made American poetry different to English poetry.

I then went on to study Creative and Professional Writing at the University of Nottingham. For a variety of reasons, I dropped out after my first year and successfully applied to the brand new Performance and Creative Enterprise BA course at Guildhall School of Music and Drama, where I am now half way through my second year.

All of this is to say that, I have considered myself a poet for some time. It is a conviction that has shaped my actions and efforts since 2013. Three years later, I worry that I haven’t made that much progress from that initial dense period of learning where I was a part of Mouthy Poets.

I am not one of these people who have an overwhelming compulsion to write. I do not wake up in the morning and want to write. I wake up in the morning and want to be a great writer. The important thing to me has always been making good art, not to make just for the joy of making. There are pros and cons to how I approach poetry. The end goal being ‘good art’ puts a fair amount of pressure on the process of writing. Fear of failure is rife within me. It is the main stumbling block of my practise. My inner editor, so concerned with the product, often will not allow my creative brain the freedom to run free, make mistakes and learn.

If this, then, is the problem, the solution is to write. Write a lot, write without discrimination between what is good and what is bad.

A major realisation I’ve had while being, living and working in London is that I am a competitive person. I mean, I knew this already, but saw it as a problem rather than a positive aspect of my character.
It seems silly to say now, but I think I felt that in order to be an arty, lefty person, I had to leave behind or ignore the part of me that is headstrong, competitive and argumentative. As if the compassion and considerate thought I saw as necessary to be a good artist were somehow at odds with these traits. I don’t know why I felt this, but I did and it really held me back.

Since realising, or rather, rediscovering my competitive self, I have grown to see it as my ‘superpower’ as far as my artistic practise. Last year I set myself, on two separate occasions, the challenge of writing 50 poems in a month. The arbitrary setting of goals was something I really rose to. And when my interest in the Quantified Self movement came into play, I had fun visualising the results of these challenges, and learned something about how I reacted to the deadlines I had set myself. 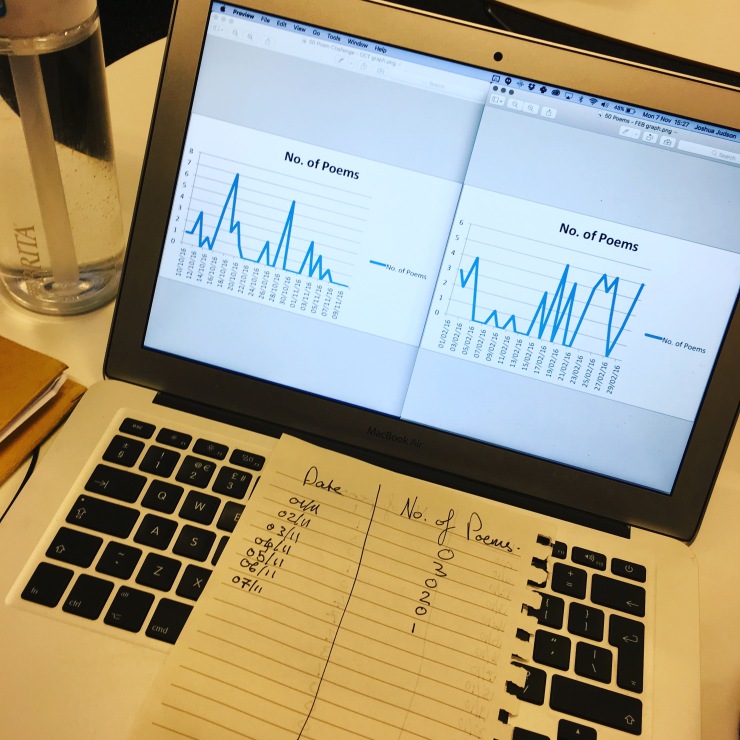 Aside from appealing to the competitive and data-loving parts of my brain, the challenges I set myself gave me a much needed lens through which, finally, everything I wrote did not have to be perfect. I was fine with writing pages and pages of utter trash, because I knew that maybe one in ten of the poems I wrote would be worth revisiting (more if I was having a particularly good period). As I opened the piece by saying, it really is a numbers game for me now.

Over the Christmas/New Year period, I had chance to reflect on my output. I was frankly shocked to find that, even with two ’50 poem months’, and a further 50 poem challenge concerning form I engaged in during May, the total of the poems I had written in 2016 was only 250.

Returning to my concern with being a good (if possible, great) artist, if that really is something I want, 250 poems is simply not good enough to have written in a year.
In terms of the 10,000 hours it takes to become an expert at something, if we assume it takes ten minutes to write a poem, then in the whole of 2016 I only spent 41 hours of practise at my craft.

As a student at a conservatoire, I am used to the idea that artists must dedicate hours and hours of practise every day, yet I never applied it to myself. I saw this as a problem that needed fixing.

At first, I considered making every month in 2017 a ’50 poem month’, but looking at the graphs of my productivity I made for the months of February and October in which I undertook the challenge, I saw that the number of days that I didn’t write outnumbered the days I did.
If I wanted to instill a daily obligation to my practise, the goal had to be higher. Also 12 months of 50 poems comes to an anual total of 600, which isn’t a sexy number to be aiming for. 1000 sounded much more impressive.

So this is what I am doing. I am going to write a minimum of 1000 poems in the year 2017. It is going to be hard. It is a potentially stupid idea in that there is the possibility that I will fail. This is why this challenge is going to be public.

Another part of my character that I am not particularly proud of is the fact that I want to be seen as clever and interesting. This idea has permeated my poetry for a long time, resulting in cringey ,’look at how clever I am’ poems, that nobody wants to see or hear. I am proud to say this need is apparent in my poetry less and less as I develop as a writer and a person, but it is there somewhere, and perhaps channeling that through a series of blogs as I progress through the challenge will fulfil this need until it is eradicated from the poems themselves.

The public nature of this challenge is designed to keep me accountable to my goals. And, hopefully, it will result in some interesting discussion about writing process and technique amongst other issues if and when people engage with what I am doing and reporting as part of the challenge.

As much as I would love to be banging out 100 poems a month, I know that life has a habit of getting in the way of our best intentions, so I have devised a system to allow for some flexibility.

In addition to the #ThousandPoemYear challenge, I am challenging myself to read a minimum of one poetry collection a week. I will post a blog about my reading at the end of each month.

If you’ve made it to the end of this post, well done and thank you. I certainly hope that there is someone who will find this journey worthwhile to follow. But hey, if there isn’t I’ll be doing it anyway. Pop back and see how I’m getting on. Why not? It might be interesting. I might fuck up.