Around this time last year, I got my second tattoo. It’s one I share with A LOT of other people (so much so that there is a book about it). The tattoo was of ‘The Bars’ – the logo of Hardcore Punk band, Black Flag.

I am something of a connoisseur of Punk Documentaries, so it’s a big thing for me to settle on a favourite, but I’ve been settled for some time on PUNK:Attitude A film put together by Punk legend, Don Letts. In the opening few minutes of the documentary the filmmaker Jim Jarmusch defines Punk as ‘a fight against complacency’. This is hands down my favourite thing that’s been said about Punk ever, and is my working definition of the word. It sums up everything that is important to me about Punk and to me, Black Flag are the embodiment of this mindset.

I got the tattoo as a reminder to try to avoid complacency at all costs – whether that be professionally or personally.

The problem with this is that complacency is a difficult thing to guard against. Humans are, by nature, pattern making creatures and the process of avoiding complacency means breaking from patterns.

We like patterns for a reason, though. I’m no anthropologist, but there has to be some evolutionary advantage to recognising patterns – ‘if I climb this tree, the predator can’t reach me’, resulting in a pattern of climbing trees to avoid danger and so on..
But we’re at the top of the food chain now, and unless the Dolphin revolution is nigh, we should be safe there. So while that is the case, I believe we, or at least those of us who make Art, have no excuse to be complacent.

With this in mind, I was very happy to see that the patterns of my writing this week are noticeably different to those of last week. Just looking at the pie chart of the forms I’ve written in, you see a difference between last week: 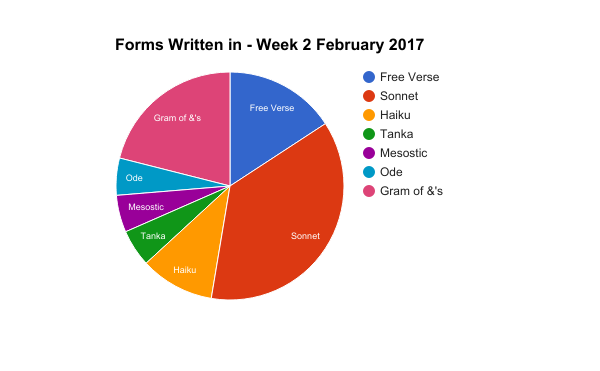 I love to see the difference in these charts. In last week’s blog I alluded to the fact that Free Verse is the form/style I usually write in, it’s my natural go-to. So it is very satisfying to see the Free Verse slice of the pie go down in size. The chart does not show values, which is to say the actual number of poems I have written in each form, but I can tell you that I’ve only written 3 Free Verse poems this week, which feels good.
I have also leaned off Haiku and Tanka, which, I feel, can be very cop out forms when you’re trying to make up numbers. The totals for these forms are just 1 Tanka and 2 Haiku.

Another satisfying aspect of this game of Spot the Pie Chart Difference is the greater breadth of forms I have written in this week. Sonnets are still a mainstay because of the #28Sonnets challenge I am doing (and posting about on Twitter), but this week has seen me write 4 Gram of &’s poems (as invented by Terrance Hayes), and even a cheeky Ode.

The one place I feel I’ve fallen down this week was the fact that I did not write every day. Due to a brief stint where depression threatened to rear its ugly head, I had a day off writing. It sounds stupid, but it does bother me. I have friends who would say lovely things about self love and self care at me if I admitted that having one day off bothered me, and I hear what they are hypothetically saying, but my work ethic is such that I feel that way.

One of the big things I’m trying to find this month is balance. A sustainable way of working, and at this moment, what that looks like for me is writing every day as opposed to having these gargantuan and draining epic writing sessions few and far between.

And yes, I do realise that this beating myself up for not writing a little everyday is not necessarily balanced – I’m working on it alright?

I think that about sums up where I am this week. Glad Valentine’s is over and done with for another year. Seeing the lovey spam when you’re painfully single is not the one.